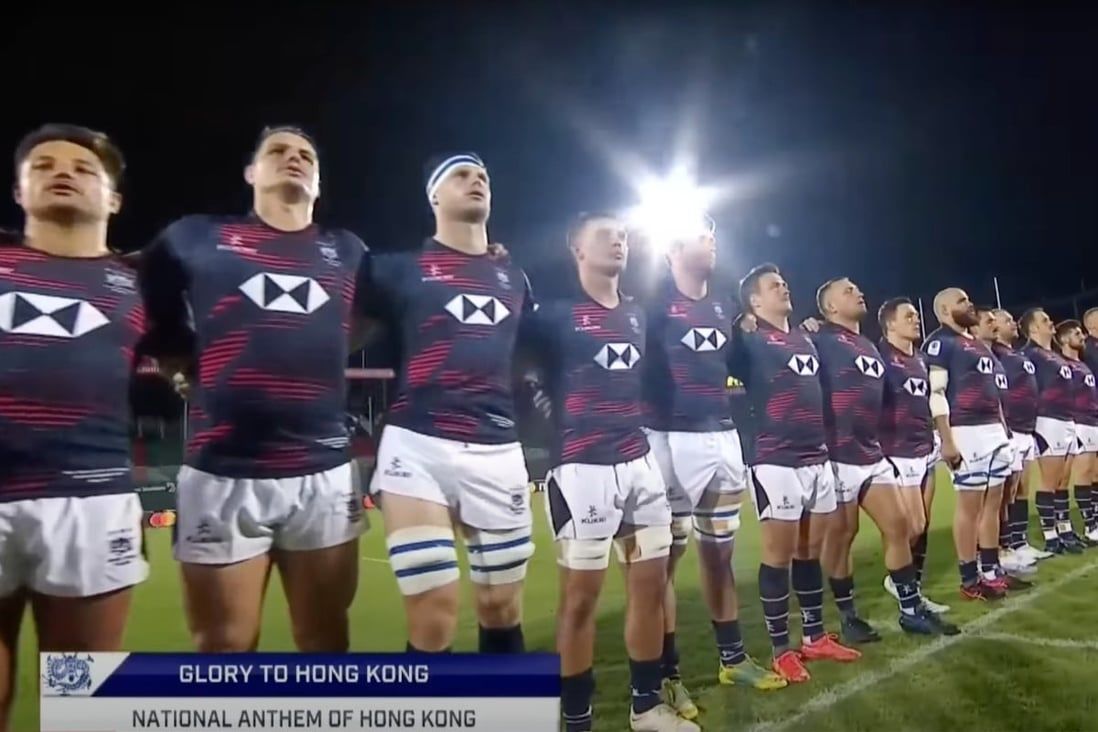 ‘March of the Volunteers’ titled ‘Glory to Hong Kong’ at bottom of screen in broadcast of Hong Kong team’s match in Dubai earlier this month, while same incorrect graphic used in coverage of game involving Tonga on July 23.

The Chinese national anthem was mixed up with a Hong Kong protest song at two more sporting events overseas, it emerged on Saturday, less than a week after a similar blunder in South Korea angered the city’s government and sparked a police investigation.

A video clip posted on a popular sports streaming site showed the city’s rugby team standing on the pitch in a Dubai stadium before a match with Portugal on November 6 as “March of the Volunteers” played, but the TV broadcaster carrying the game gave the title of the song at the bottom of the screen as “Glory to Hong Kong”. The song, often heard during the anti-government protests in 2019, was also labelled as Hong Kong’s national anthem.

Competition organiser World Rugby attributed the error to a “graphics operator” and apologised for the mistake, the Hong Kong Rugby Union on Saturday said. 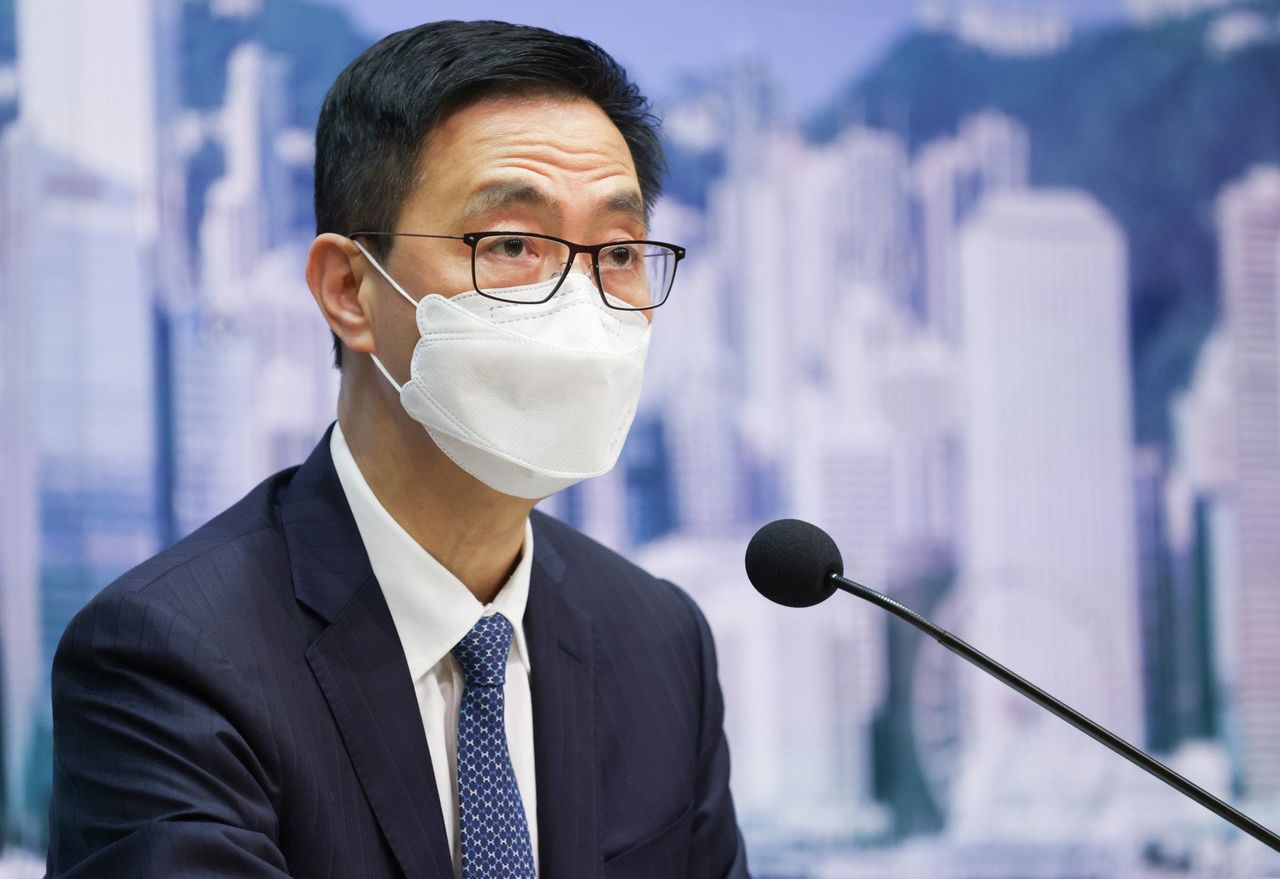 Secretary for Culture, Sports and Tourism Kevin Yeung.
The same incorrect graphic was also used by World Rugby’s broadcast production crew in its coverage of a match between Hong Kong and Tonga at the Sunshine Coast Stadium, north of Brisbane, on July 23, the union added.

“Playing or labelling the national anthem of China incorrectly is both disrespectful and hurtful to the people of Hong Kong and the nation, and the [union] has again expressed its extreme dissatisfaction with World Rugby for this serious error,” it said.

“The [union] has since requested a detailed timeline and explanation from World Rugby, as well as a formal apology from the global body to the government and people of Hong Kong.”

The union had threatened to pull out of matches in the future if such blunders continued after “Glory to Hong Kong” was played instead of “March of the Volunteers” when the city’s team took to the field for the final in Incheon against host South Korea last Sunday. Asia Rugby, the organiser of the tournament, admitted on Tuesday it had failed to send a recording of the national anthem to its partners in Korea, and insisted the incident was an honest mistake with no “malicious” intent.

“I have repeatedly emphasised that any organisation that hosts international events has the responsibility to ensure that the official version of the national anthem is played, and also should solemnly and seriously protect the symbolism and representativeness of the national anthem,” he said in Bangkok, where he is attending an Asia-Pacific Economic Cooperation summit.

The government would write to World Rugby and Asia Rugby to express dissatisfaction and provide them with the official version of the national anthem and its proper description, he added, as he called upon the organisations to release the results of their investigations and ensure similar incidents would not happen again.

Secretary for Culture, Sports and Tourism Kevin Yeung Yun-hung said it was “hard to believe” the two songs had been mixed up again.

“I can hardly believe that [mistakes] related to our national anthem were made at rugby matches consecutively within such a short time,” Yeung said. “It is hard to accept.”

His organisation had formed guidelines for associations under its wing to follow when taking part in games overseas, including sending copies of the national anthem and flag to participating teams and event organisers, he said. Team leaders or coaches would also be instructed to suspend games immediately if anything went wrong, he added.

Legislator Elizabeth Quat Pei-fan called for a thorough police investigation into the latest incident, and she said the city’s rugby union should apologise to the public and submit a report to the government.

The Hong Kong team travelled to Dubai to compete in the final qualification tournament for the Rugby World Cup 2023 that runs until November 18. The video clip of the match on November 6 was uploaded to a YouTube channel operated by RugbyPass, which identifies itself as the official streaming platform for the sport in Asia.

The Hong Kong Rugby Union on Saturday said no member of the local team or management was aware of this issue until after the match. None of them were asked by World Rugby or its broadcast or production teams the name of the national anthem or informed that the song title would be displayed on screen, it added.

World Rugby apologised to the union for the error and made attempts to retroactively fix the song title displayed in related broadcast videos, the local sports groups said, adding “March of the Volunteers” was played and accurately labelled during the ensuing games featuring Hong Kong on November 12 and 18.

The lyrics of “Glory to Hong Kong” contain lines such as “Liberate Hong Kong” and “revolution of our times”, a slogan considered by the courts to be problematic under the national security law imposed by Beijing in the wake of the social unrest.

The song was the subject of contention in the first trial under the national security law, which involved a man who rammed a motorcycle carrying a flag bearing the protest slogan into three police officers. The court found the slogan could be interpreted as secessionist.
Add Comment