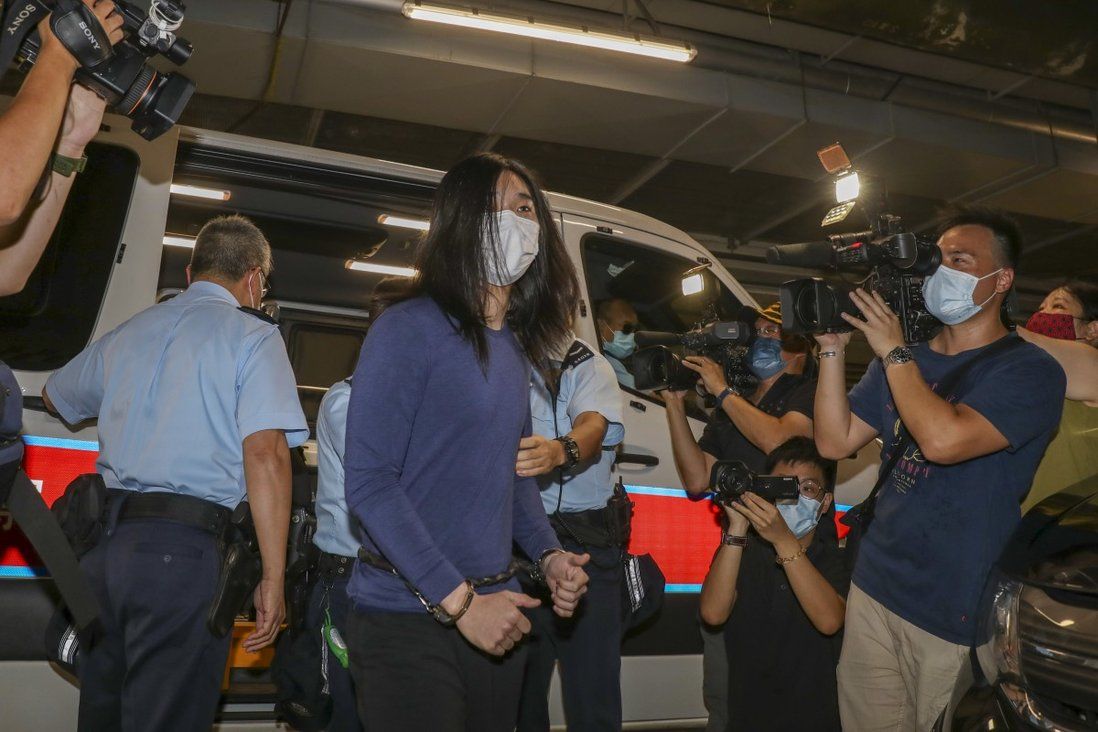 Duo releases two videos, saying they provided more than HK$1 million of their own money to help pay for protesters’ expenses during their 20-month hideout.

Two members of an anti-China social media group wanted by Hong Kong police for their role in helping four protesters escape arrest have admitted they provided financial support but rejected claims they had duped the quartet.

In two videos posted on Friday on Tuesdayroad, an anti-government commentary channel on YouTube with more than 400,000 subscribers, two hosts admitted that they had provided over HK$1 million (US$127,340) to pay for rent and food expenses of the protesters who were in hiding for 20 months in three locations.

But they denied they had taken money from the four under the pretext of helping them to flee the city. The four were intercepted and arrested by police on Wednesday.

They include 21-year-old Tsang Chi-kin, who survived being shot in the chest during a violent protest in Tsuen Wan on October 1, 2019, at the height of the social unrest in Hong Kong. The four protesters tried to seek refuge at the United States consulate in October 2020, but were turned away.

They all faced a range of charges such as rioting and participation in unlawful assemblies. They had missed various legal proceedings and failed to report to police as scheduled since late 2020.

Releasing two videos totalling 33 minutes without showing their faces on Friday, the two hosts referred to a man surnamed Chan as the person behind the suspects’ asylum bids. He was identified as the founder of Friends of Hong Kong, a London-based anti-China group.

The duo revealed that they got to know Tsang and the other three protesters, aged 16 to 24, through Chan in August 2020. While they said that Chan had allegedly collected HK$200,000 from each of the four, they did not say if the money was passed to them.

They added that Chan was widely known in the activists’ circle for crowdfunding and he had also left for Britain.

“Chan asked us for help. He said that he knew Tsang. I knew Tsang was shot by police and I was furious,” the first host said. “We made an all-out effort to save them … We also hired someone to send food to them. We also bought them game consoles and games because we worried they would be bored.” 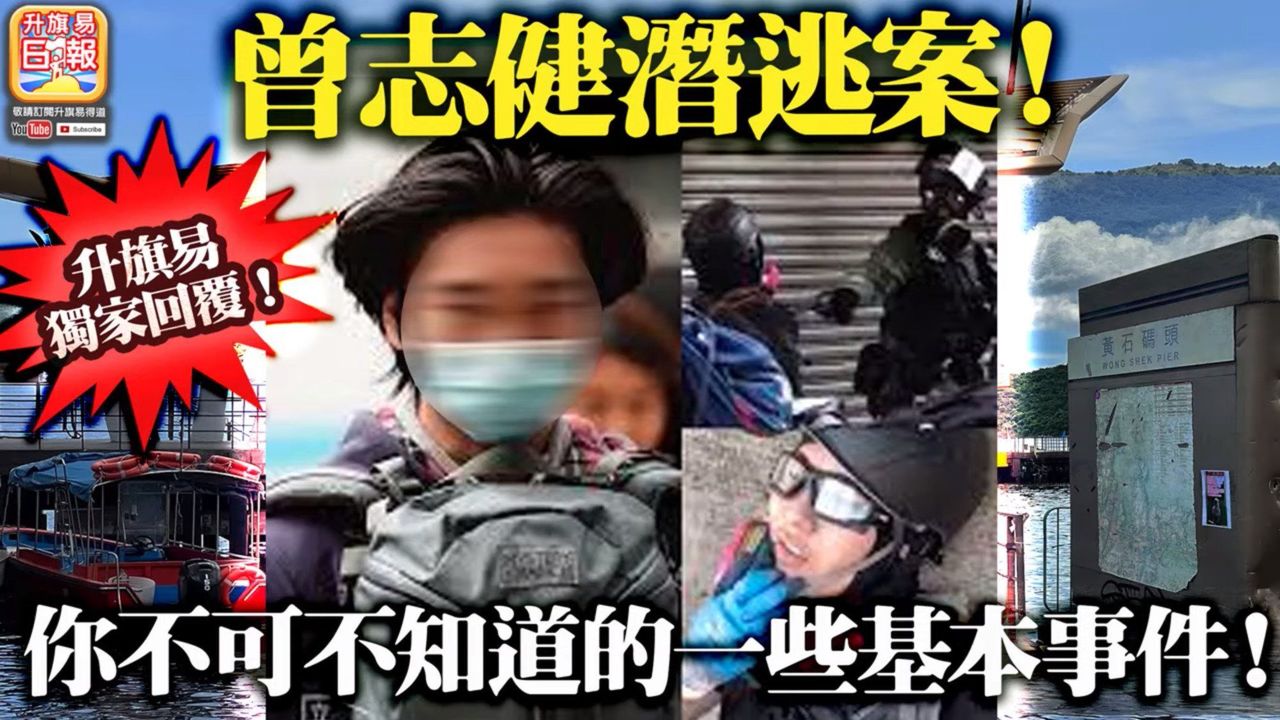 A YouTube channel has rejected claims that its hosts duped four wanted anti-government protesters under the pretence of helping them to flee the city, saying they had spent over HK$1 million of their own money to pay for the protesters’ expenses.

On Thursday, police revealed the four protesters had paid a total of HK$400,000 to a “social media channel group” to flee the city. During the 20-month period of hiding, they were stuffed into carton boxes and “inhumanely” treated as cargo while being moved to three different hideouts – two industrial units and a flat – all in Tsuen Wan, the force said.

The Post has learned that the YouTube channel is currently under investigation and that Chan and the two hosts, who left for Britain in July 2020, are on a list of people wanted by police. Comments made on the YouTube channel are critical of the government and police.

Friends of Hong Kong released a statement in 2020 pledging its continued support for protesters such as Tsang, and said the group was assisting his girlfriend, Aurora, to settle in the United Kingdom.

The first host said they had arranged a “special route” for the four to flee the city using a container ship late last year, but the bid was cancelled four days later because the plan was exposed after “someone” used the trip to raise money in Hong Kong.

Both hosts repeatedly said that there was no way for the protesters to flee since late 2020 except through the “special route”, as no shipowners were willing to smuggle anyone following a police crackdown.

The first host admitted he had asked the four absconders to film a video to describe their plight before the trip, but said the clip was not for crowdfunding purposes. They also lost contact with the four later, the second host said.

“We only requested them to reveal who had been sponsoring their living expenses because we spent thousands of dollars on them each month. But we did not know that they were treated like that as we were not in Hong Kong. We did not know if anyone had lined their own pockets,” the first host said, but added the video was never made public.

The two hosts said they believed the four protesters were betrayed by a middleman who convinced them that there were ships to Taiwan, and this led to their arrests.

According to police, each person was regularly asked to make videos of themselves with their mobile phones for crowdfunding appeals. The group that set out to help the four enter into hiding, however, claimed it could not afford expenses and asked each of them to pay more than HK$10,000 a month for rent over the past three months.

The group, described by a police insider as a “gang of con artists”, is thought to have lied to the four protesters, claiming a boat journey to Taiwan had been arranged for them, but it then gave police a tip-off that led to arrest of the quartet in Sai Kung before dawn on Wednesday.

“The other ‘facts’ revealed by the pair could be excuses,” said a police insider, adding the hosts and Chan might simply be colluding with each other.

A force spokesman said they would not comment on individual cases.

“In conducting any operation, police act on the basis of actual circumstances and according to the law,” the spokesman said.

Meanwhile, Yip Ho, a 34-year-old suspected to be a member of the group and responsible for delivering food to the four protesters, was taken to West Kowloon Court on Friday. He was charged with intending to pervert the course of justice by providing help to the four between October 2020 and Wednesday.