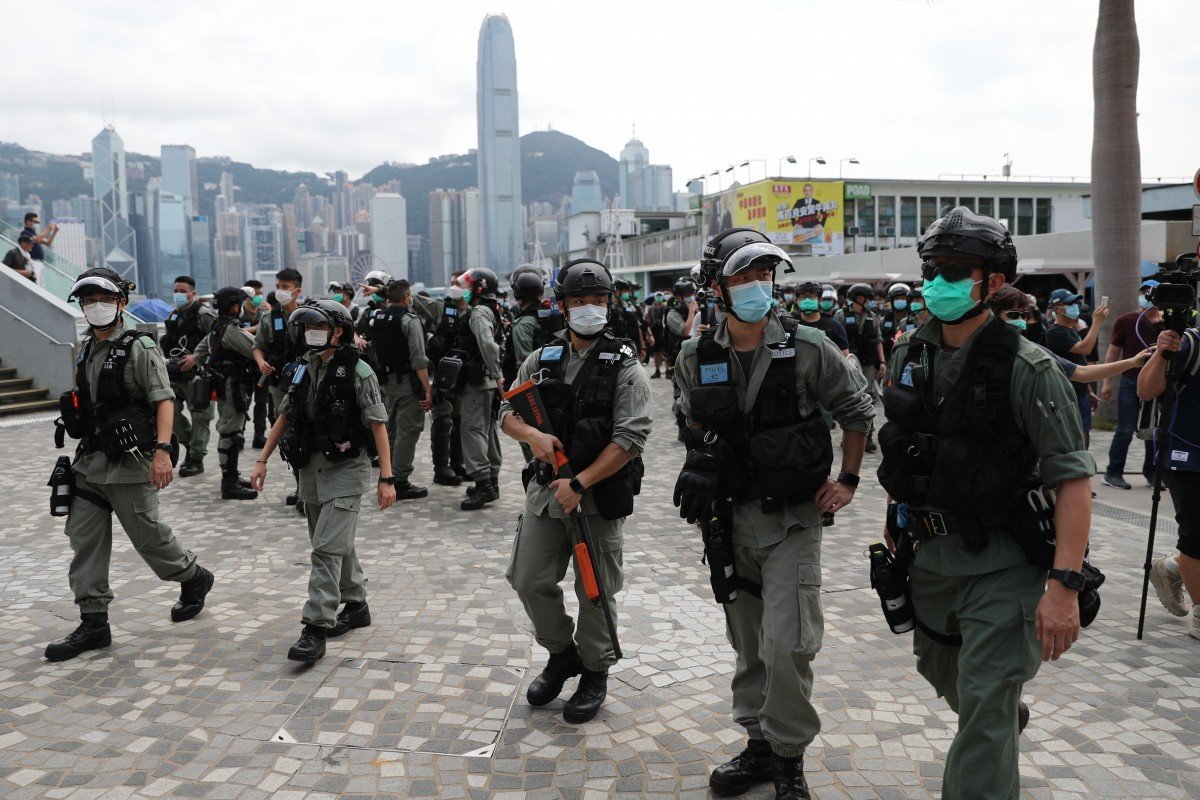 Organisers hope 50,000 activists will attend unauthorised anti-government rally, planned for Sunday, against postponement to Legco elections and the national security law.
Hong Kong police plan to deploy 2,000 riot officers across West Kowloon on Sunday, with water cannons and armoured vehicles on standby, in response to online calls for a mass anti-government protest against the delay to city elections, the Post has learned.

The heavy police presence is being drafted as anonymous activists aim to draw 50,000 people to the unauthorised rally in Nathan Road, on the day the Legislative Council polls were due to be held until the government postponed them for a year, citing Covid-19 and the risk to public health.

As well as venting anger over the delay, Sunday’s planned protest targets the Beijing-decreed national security law imposed on the city, which bans acts of secession, subversion, terrorism and collusion with foreign forces, and the potential launch of a new health code system in the city.

A police source said the force expected the protests to pose a “high” security risk and that demonstrators might block roads and vandalise infrastructure.

Police would refuse to give them the chance to cause disruption, so had decided to install a huge disciplinary force on the streets to “prepare for the worst”, the source said.

“We will make decisive arrests as we do not think dispersing protesters by enforcing social-distancing rules will be effective,” the insider said.

“Water cannons and armoured vehicles will be on a standby mode on busy streets. We will also deploy more than 2,000 riot police across different districts, especially along Prince Edward to Tsim Sha Tsui.”

Apart from Remington shotguns and Federal riot guns, which were commonly used to fire tear gas, rubber bullets and beanbag rounds during last year’s social unrest – which erupted that June over the now-withdrawn extradition bill – officers would also be equipped with pistol-size pepper-ball launchers.

The force bought the pepper-spray guns in the wake of those protests. They were first seen on July 1 this year, when thousands of protesters took to the streets in defiance of the national security law, which was enacted a day earlier.

According to the manufacturer, the lightweight pistol is equipped with two six-shot magazines to be used with 68 calibre rounds or other projectiles.

The force said on social media it was aware of online calls continuously inciting people to join what it called an activity that aimed to “reignite fire on the battlefront” and “strike back from desperation”.

“Police once again warned that the activity is an unauthorised assembly … It is illegal for anyone to organise or participate in, or even be involved in a violent confrontation,” the force said. “The police will act swiftly and decisively, make arrests in due course.”

Any group gatherings at this critical period in tackling the health crisis were “extremely selfish acts” that might increase the risk of the coronavirus spreading.

The social media calls to march along Nathan Road – from Jordan to Mong Kok – from 2.30pm on Sunday went viral on platforms such as Telegram channel “New June 9 Kowloon protest”, which has nearly 9,000 subscribers.

In a statement, organisers said they chose what would have been polling day to oppose the voting delay without consultation.

“The government’s decision to postpone the elections citing the epidemic aimed at barring us to voice out through an institutionalised way,” it said.

“We believe that a mass rally is the best way to express our views, and show that we will not back down.”

Organisers asked participants not to linger on the protest route before nightfall. “No violent actions are recommended,” it read.

Police consent for the event was not sought because there was no prospect of success, the organisers added.

Gatherings of more than two people in public are banned under social-distancing restrictions still in force to contain the epidemic.

Protesters accused police of abusing their powers when fining them during demonstrations on August 31 marking the first anniversary of a clash between activists and officers at Prince Edward MTR railway station.

On August 30, the force fined 29 people HK$2,000 (US$258) each for violating social-distancing curbs at a protest in Mong Kok shopping malls.