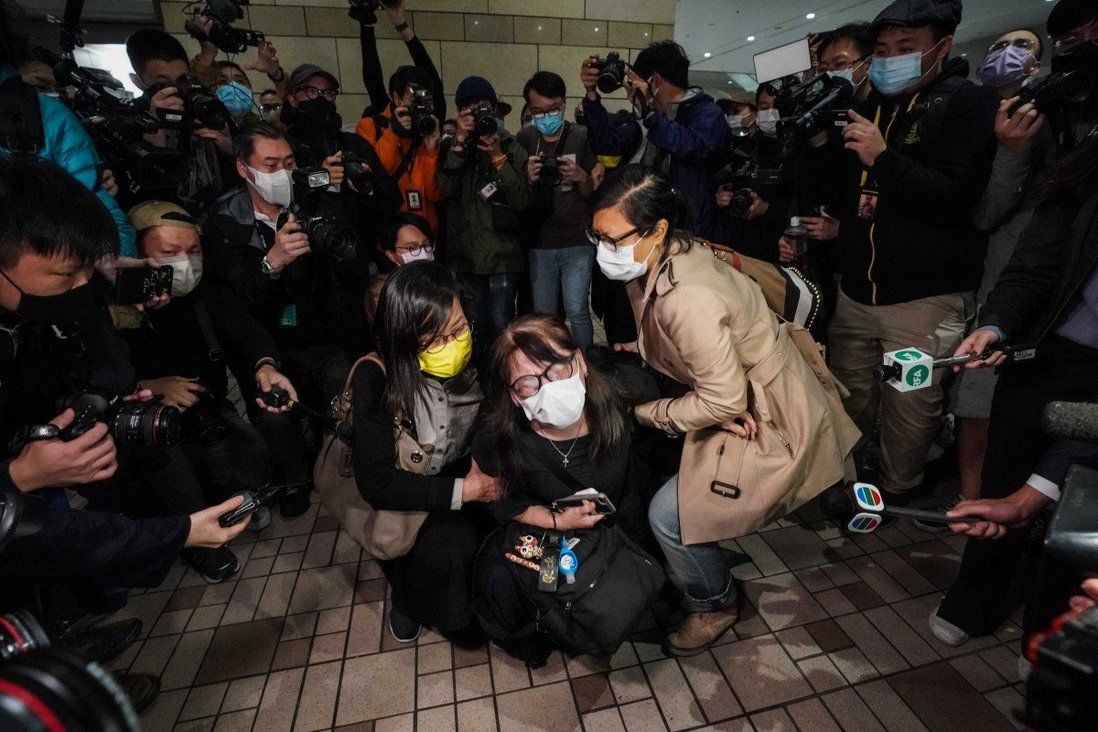 Fifteen of the 47 Hong Kong opposition politicians and activists facing subversion charges were granted bail in the city’s biggest crackdown to date under the national security law, but they were immediately ordered to remain in custody after prosecutors lodged an appeal against the decision.

The ruling on Thursday came after 28 hours of marathon hearings spanning four days.

Those who secured bail included former lawmakers Jeremy Tam Man-Ho, Helena Wong Pik-wan and district councillor Kalvin Ho Kai-ming. They were placed on cash bonds of up to HK$1 million (US$129,000) and ordered to observe stringent conditions including being banned from discussing or participating in any election.

But the group of 15 were ordered to return to jail after the presiding judge extended their time behind bars at the request of prosecutors, who said they would ask the High Court to review the decision.

Chief Magistrate Victor So Wai-tak said he was bound by the law to remand those granted bail, citing the Criminal Procedures Ordinance. The provision in that legislation also stipulates that the case must be brought before a judge “as soon as practicable” or in any event within 48 hours from the suspension of the bail decision.

Legal scholar Benny Tai Yiu-ting, one of the 47, rescinded his application at the last minute after his bail was revoked by the Court of Appeal in a separate case just before the bail decision at the lower court.

The magistrate also postponed the case to May 31 at prosecutors’ request, but ordered that they must seek legal advice and determine the trial venue during the adjournment, failing which they must compile a report explaining the progress of the police investigation.

Defence lawyer Martin Hui Siu-ting SC asked the magistrate to order the prosecution to reveal the identity of the person who made the appeal decision, but So refused, saying it was “inappropriate” for him to probe prosecutors’ decision-making process.

After the hearing, one of the defendants, activist Tam Tak-chi, shouted in the dock: “No crime for political prisoners. Hongkongers will not die.” He also chanted: “Five demands, not one less” – one of the catchphrases of the 2019 anti-government protests. His co-defendants thanked their lawyers and waved goodbye.

Magistrate So banned those who secured bail from engaging in acts or making speeches that might “reasonably be regarded” as constituting an offence under the Beijing-imposed legislation or existing local laws safeguarding national security.

Other prohibited conduct included contact with foreign government officials and legislators, as well as engagement in any level of governmental and non-governmental elections. However, those on bail can still exercise their rights to vote.

Other bail terms imposed on the 15 comprised a travel ban, the surrender of all travel documents including their British National (Overseas) passport, and a seven-hour daily curfew from midnight to 7am. 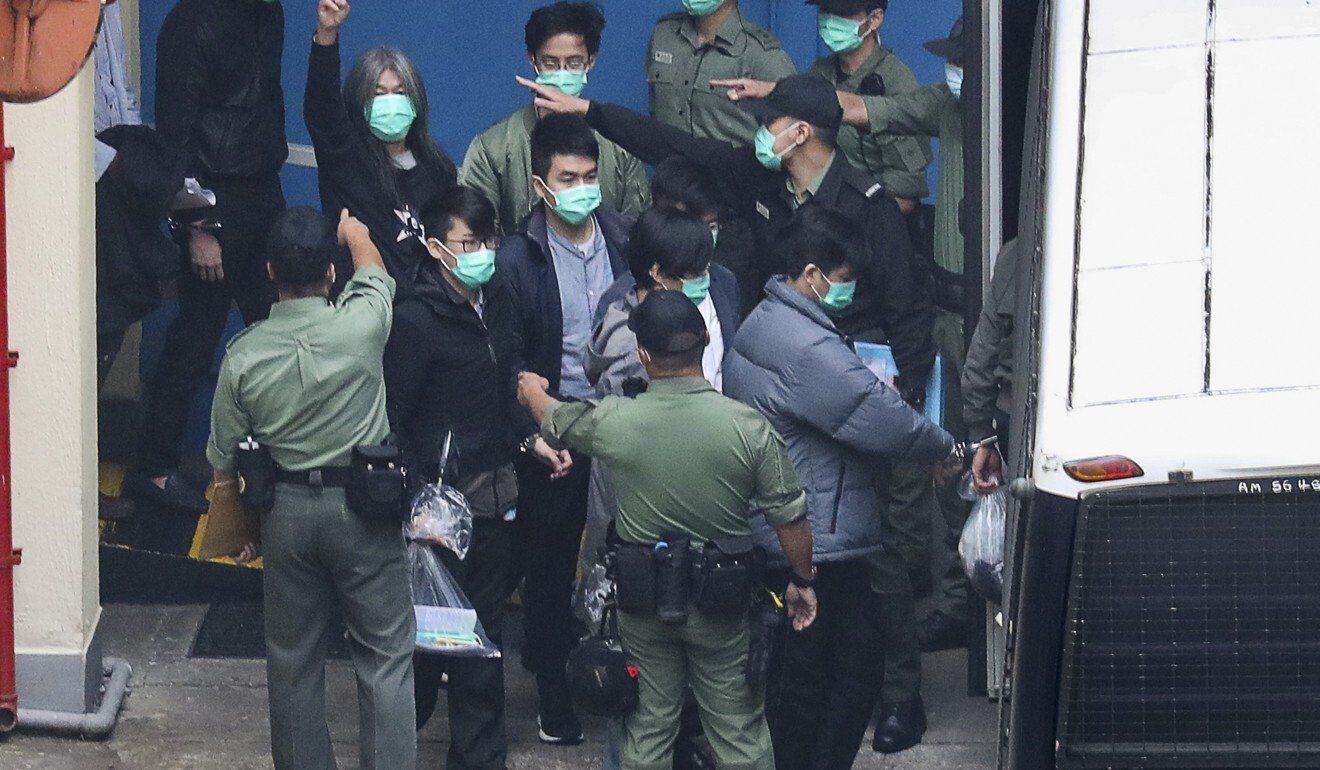 Some of the 47 opposition activists being escorted to a van taking them to the bail hearing earlier on Thursday.

Supporters expressed their disappointment that those granted bail had been remanded. Earlier, as the crowd chanted protest slogans, police had raised the purple flag, warning them they could be in breach of the national security law.

“[The bail ruling] is not something to be happy about,” said Grace Heung, a 30-year-old supporter, who called the results sheer “political calculation”.

“They only want to make the public feel satisfied, as at least 15 of them have been granted bail,” she said, adding that all 47 should be released.

After the ruling, police again cordoned off the court entrance, warning the crowd they were breaching the Covid-19 social-distancing rule on public gatherings no bigger than four. Only journalists with press passes were allowed to stay in the pedestrian area surrounding the courthouse.

Emilia Wong, girlfriend of activist Ventus Lau Wing-hong, who was denied bail, said the conditions laid down by the presiding judge were already very stringent and harsh.

“They would no longer exist in the public sphere [if they follow the bail conditions],” she said. “Why does the regime still fear these ‘dead people’ would threaten national security?”

Nicole Yu, wife of activist Lester Shum, said the hearing lacked transparency. She added that it was “unfair and unreasonable” to lock up the defendants.

“The denial of bail to 32 of these politicians and activists means they are effectively beginning to serve lengthy jail time on charges based entirely upon claimed hypothetical threats to national security,” he said.

“None of them have committed a recognised crime, but they have fallen victim to a national security law that deems people a ‘threat’ simply for the peaceful expression of political views and for taking part in the conduct of public affairs.” 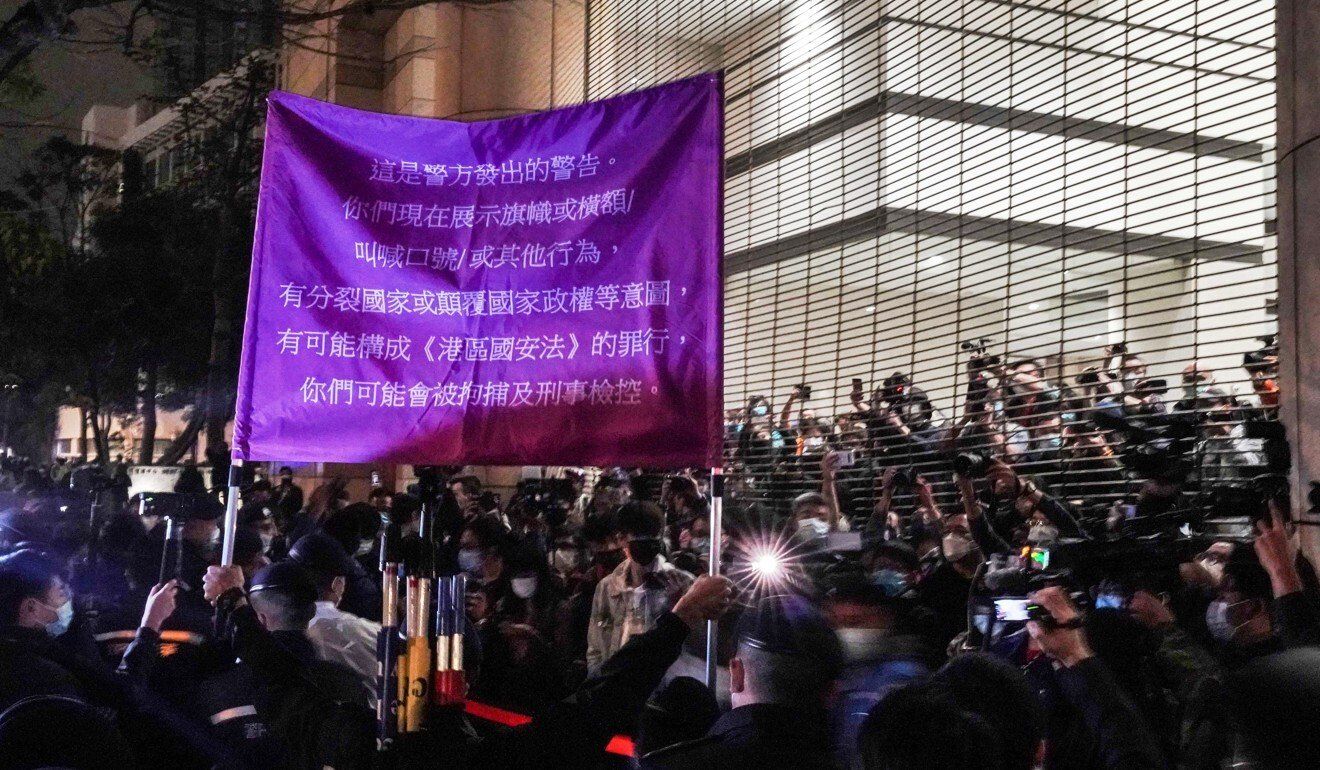 The decision at West Kowloon Court on Thursday marked an end to the unprecedented bail hearings that left some of the accused temporarily hospitalised due to exhaustion, while others quit their political parties or disbanded activist groups they had founded.

Defence lawyers had asked the court to relax statutory restrictions on media reporting of the bail proceedings, arguing the exemption would enable the public to understand how the new law was being enforced and interpreted by authorities.

Hong Kong law governing criminal procedures permits just six types of information to be published in media reports on bail proceedings, including the defendant’s name, the alleged offence and the application’s result.

But Magistrate So turned down the request, citing the need to safeguard the defendants’ interests and the integrity of the future trial.

That decision means the media cannot reveal the content of the oral submissions on the 47 bail applications advanced by defence lawyers and the defendants themselves.

But the magistrate said: “I have indeed heard a lot of touching [submissions].”

Defence lawyers earlier complained about the “sheer torment” their clients had endured throughout the proceedings. They also alleged the prosecution had abused both power and procedure in pushing forward with the case despite being months away from completing their investigations.

Given the high threshold for bail conditions under the Beijing-imposed legislation, that decision could see the accused spend years in jail before the actual trial. 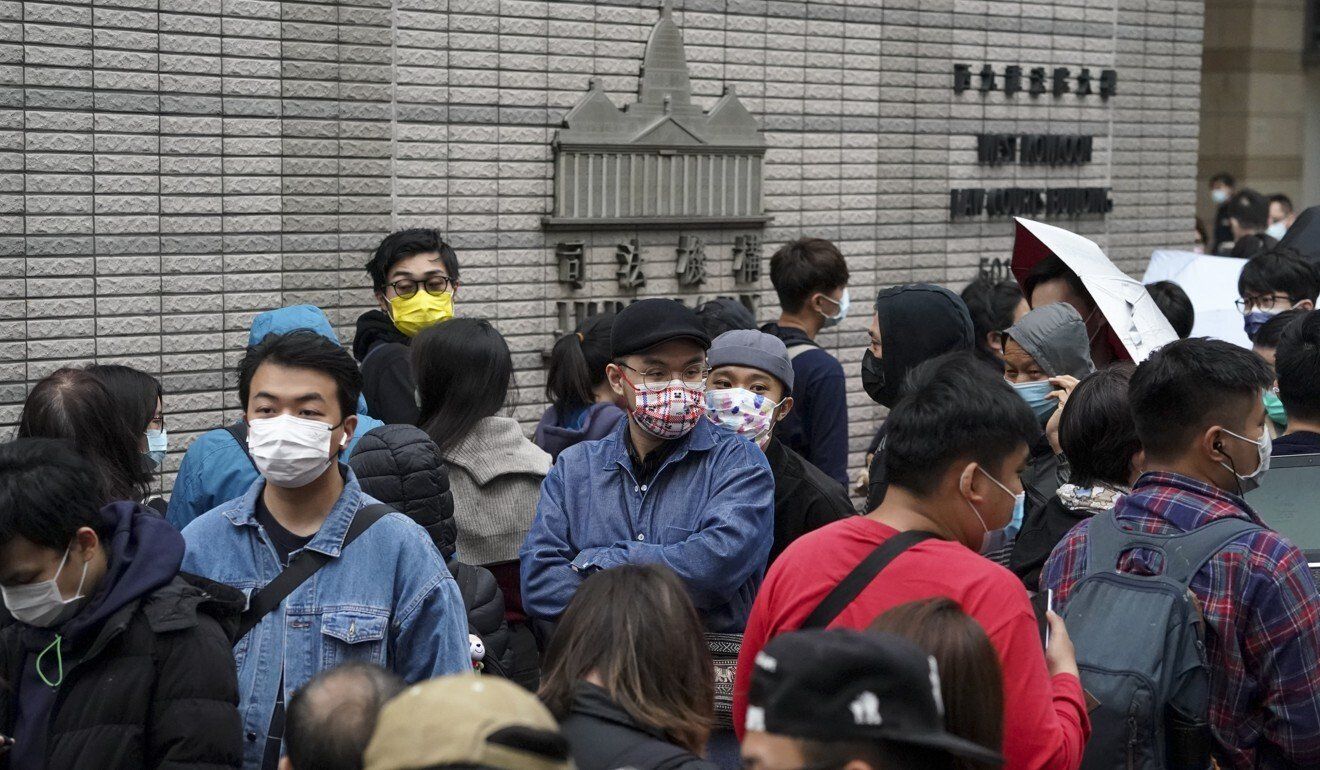 Supporters queue for the bail hearings at West Kowloon Court on Thursday.

The 47, including former lawmakers and incumbent district councillors from the opposition camp, were first arrested in January for taking part in what authorities alleged was a subversive plot to seize control of the legislature with the ultimate aim of paralysing the government and toppling the city’s leader.

While police requested that the group report to them on Sunday, about a month earlier than scheduled, prosecutors revealed in court that the investigation was incomplete and asked the case to be postponed for three months, meaning the defendants would serve at least that long in jail as the prosecution opposed their temporary release.

Western governments demanded the immediate release of the defendants, prompting Hong Kong’s Department of Justice to slam the request as disrespectful and an attempt to “meddle in” the city’s affairs.

The opening session of the bail proceedings started at 4pm on Monday and ended at nearly 3am the next day, with hundreds of the defendants’ supporters queuing to enter the building.

Eight bail applications had yet to be heard by the time the second session ended on Tuesday night, and while defence lawyers finished making submissions on bail on Wednesday evening, seven of the accused opted to fire their representatives and personally appealed to the magistrate afresh. Four of them were still waiting for their turn to speak by the end of the third day.

In a separate development, sources confirmed on Wednesday that four Civic Party politicians charged in the case had quit the party, while the Hong Kong Civil Assembly Team, founded by defendant Ventus Lau, announced its disbandment on Facebook.

Earlier on Thursday outside West Kowloon Court, more than a hundred supporters waited for the results under the rain. Some held yellow umbrellas, an iconic protest prop in the 2014 Occupy movement.

They chanted slogans often heard during the 2019 social unrest, as dozens of police officers cordoned off an area outside the court building. Police also requested volunteers to move away some of their supplies, including bottled water and snacks, saying they had obstructed an emergency exit.

By 7pm, as the magistrate was about to announce the bail result, supporters gathered outside the court, chanting slogans while holding up mobile phones with their flashlights lit.

By 9.45pm, some supporters remained at the scene, although police had pushed them back by a few blocks. They waved torches at departing vehicles carrying the activists to show solidarity.