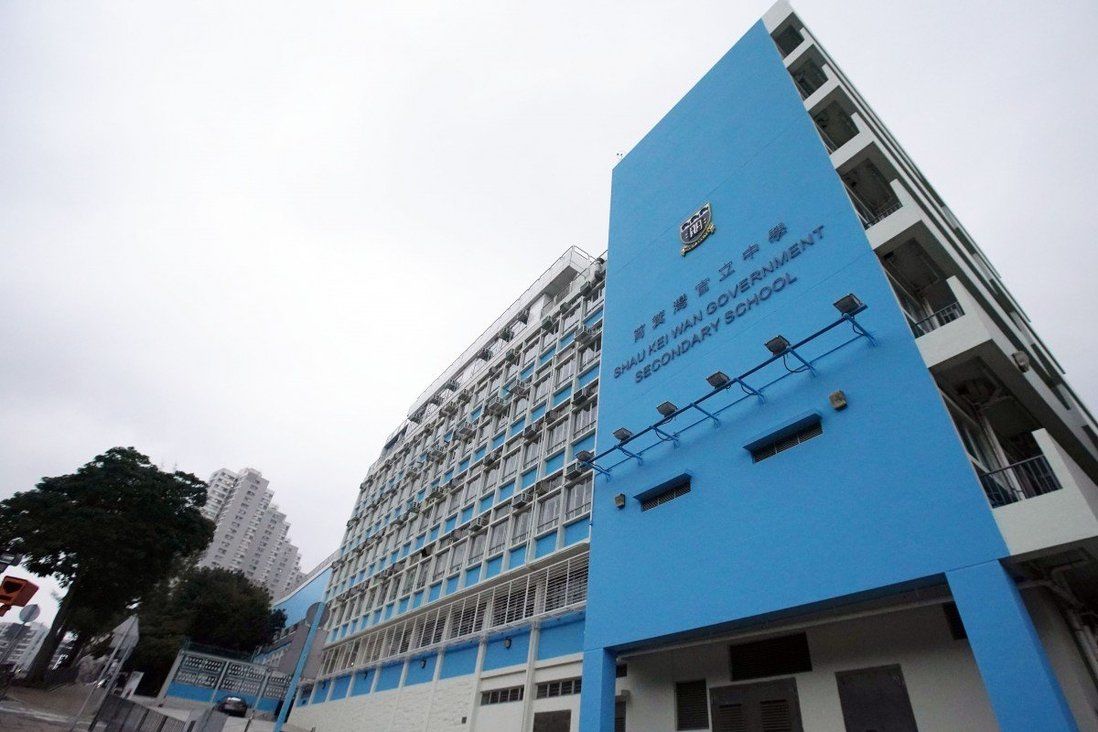 Hong Kong health authorities have sent more than 130 pupils and teachers from a government secondary school into quarantine and ordered mandatory Covid-19 testing for hundreds of others after two students who sat for an exam in the same hall were found to be infected.

Both the infected pupils at Shau Kei Wan Government Secondary School live in Wai Lee Building in Quarry Bay, which has been hit by seven Covid-19 cases so far, and officials on Monday evacuated more than 20 households from the block after experts found evidence of vertical transmission of the disease as well as faulty pipes.

Authorities confirmed 32 new cases citywide as they ordered another daily lockdown for mandatory testing overnight – this time for residents of Hang On Building and 46A-46C Kweilin Street in Sham Shui Po, as well as Man Ying Building in Jordan.

Hong Kong leader Carrie Lam Cheng Yuet-ngor late on Monday visited the restricted zone around Man Ying Building﻿, where she was greeted by noisy protests from residents and district councillors against the disruption from repeated lockdowns in the area. She left after about 20 minutes.

Police commissioner Chris Tang Ping-keung later paid a brief visit to one of the lockdown areas in Sham Shui Po, where he was given a mixed reception.

All but four of the latest confirmed infections were locally transmitted and six were untraceable, taking the official tally to 10,667, with 186 related deaths. More than 20 other people have tested preliminary-positive for the virus.

Dr Chuang Shuk-kwan, head of the Centre for Health Protection’s (CHP) communicable disease branch, revealed on Monday the imposition of 14-day quarantine orders on 130 students at the secondary school on Hong Kong Island.

Also to be confined at a government facility are about five teachers and some janitors working at the school. Those ordered into quarantine are classified as close contacts of the two infected students who took exams during their infectious period at the campus in late January and early this month.

“Even though they have mild symptoms, they may still pose a risk of transmission, and may use some common facilities such as toilets,” Chuang said of the infected pupils, adding they were both in Form Six but did not know each other well.

All other students, estimated to number in the several hundreds, and staff would have to undergo compulsory testing, while family members of those quarantined must also be screened, Chuang added.

One of the infected pupils was among the three Wai Lee Building residents testing preliminary-positive for the virus during an overnight lockdown imposed there on Sunday. 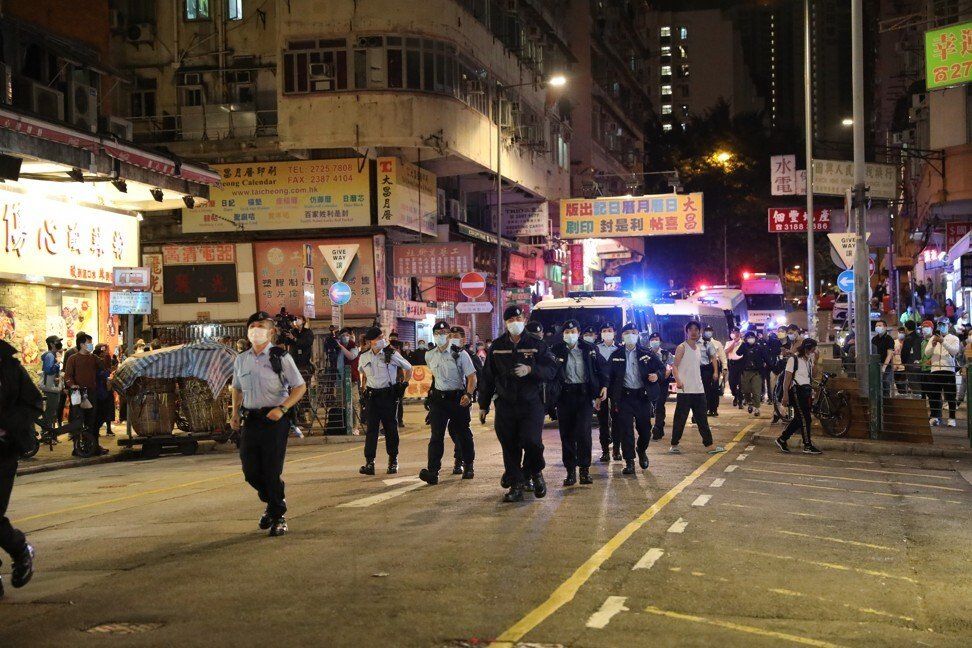 Residents of Hang On Building in Sham Shui Po were locked down on Monday night.

After an inspection by infectious disease expert Professor Yuen Kwok-yung, authorities ordered residents in all 23 flats numbered 4 to move into a quarantine centre for two weeks.

The 53-year-old building has so far reported four confirmed and three preliminary-positive cases. Six of them, including the two students, live in number 4 flats on the 14th, 17th and 21st floors.

Yuen believed the four patients in flat 1404, among the first to fall ill, had exhaled virus particles into the light shaft. The pathogens then reached other flats via a so-called chimney effect.

Another theory centred on faulty floor drains and altered pipes found at the site, as some residents reported odours in their toilets, according to Yuen, who also suspected there were subdivided flats in the block.

He also believed the recent spread originated from the homes, rather than the students’ school. 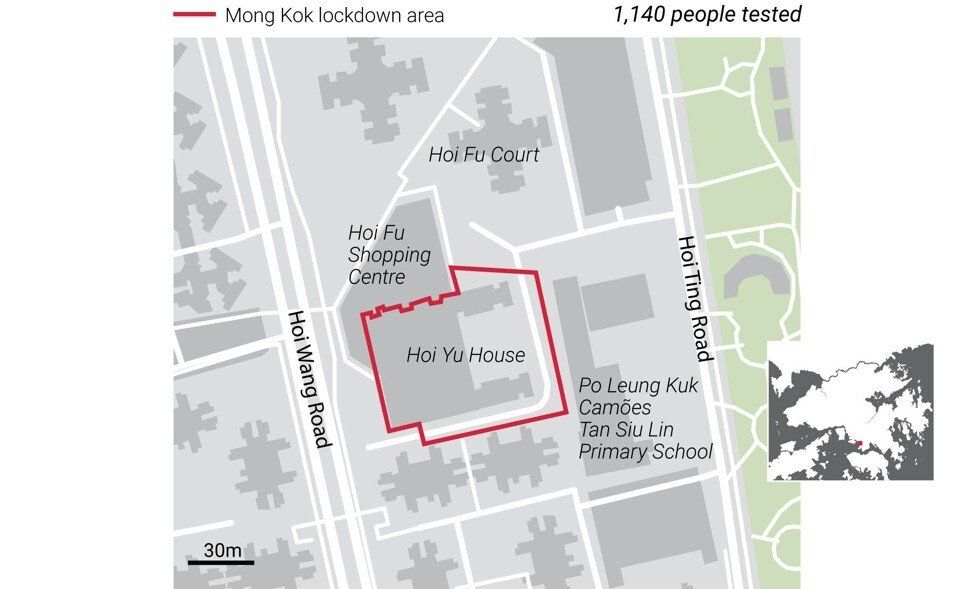 Lockdowns starting on Sunday and ending the following day were also carried out at Hoi Yu House at 2 Hoi Ting Road in Mong Kok and Cheong Lok Mansion at 1G-1K Baker Street in Hung Hom.

The former reported no cases from the testing of 1,140 residents and visitors. The latter uncovered one positive case among about 370 residents who were screened, but the authorities later clarified the resident was a discharged patient who had already recovered.

Funeral businesses in the neighbourhood around Cheong Lok Mansion resumed on Monday morning, after the residential building’s isolation period – which prevented traffic on some streets – was lifted at about 10.30am. 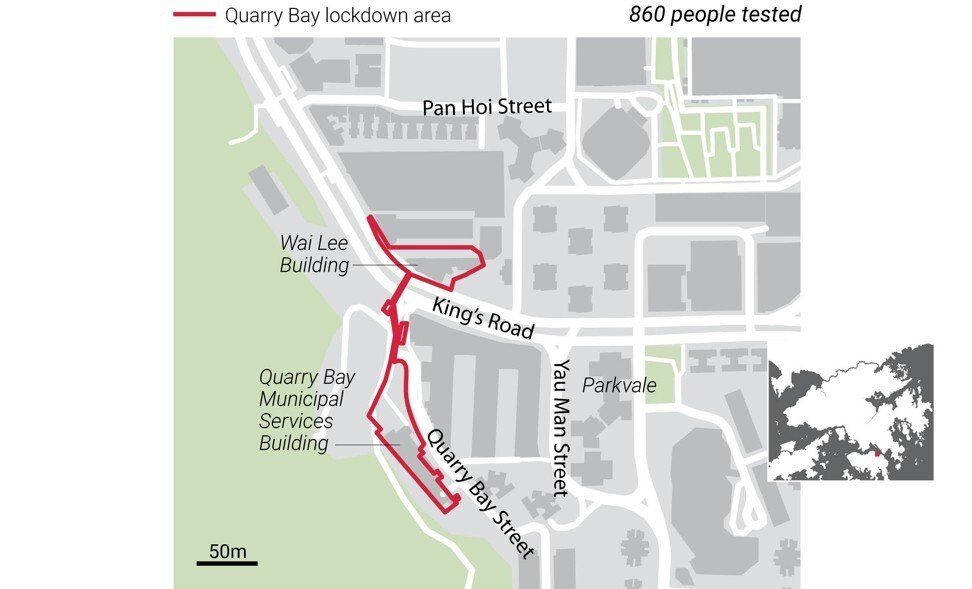 Most of the firms – including funeral services providers, cremation urn sellers and florists – said the lockdown, which began at 8pm on Sunday, had little impact on their businesses, though some closed an hour early after word spread of the looming operation.

Louis Ho, a shareholder of a funeral services provider in the area, said the business had made arrangements to deliver important materials to funeral homes ahead of the lockdown.

“We expected there would be lockdown operations nearby because of the confirmed cases here, and we planned for it in advance. So there wasn’t much impact on our business and services,” he said. 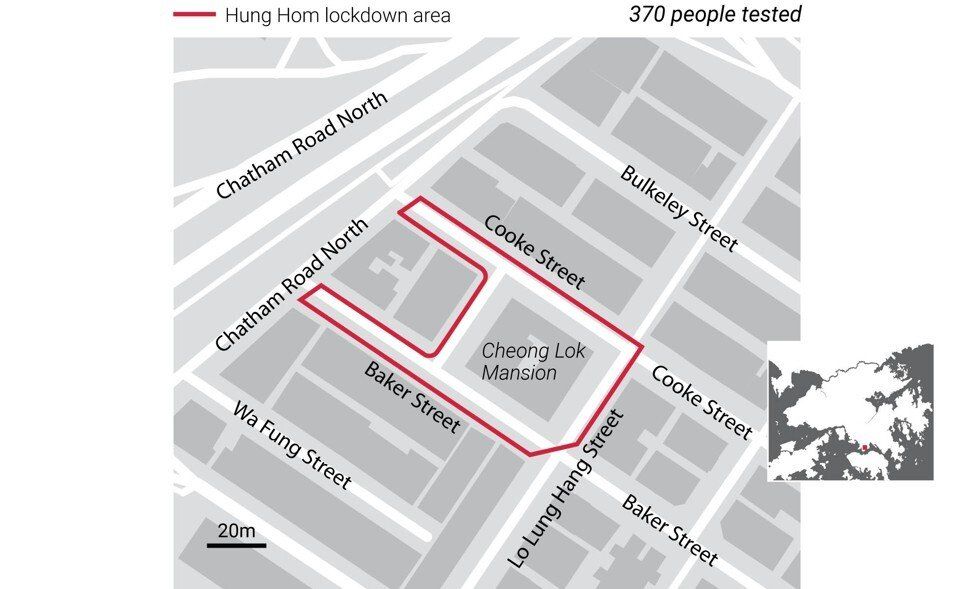 As cases continued to emerge at building sites, meanwhile, Secretary for Development Michael Wong Wai-lun said the government was aiming to test all of the city’s construction workers – as many as 200,000 – by the end of this month.

CHP’s Chuang said one more worker at the airport’s third runway site was infected, taking the total to 29, while about 3,000 other workers had already returned negative readings in recent coronavirus testing, adding a second round could be conducted soon.

While conceding the arrangement could be difficult to implement, the union said officials should specify for how long the test results would be valid.

It added some labourers worked at multiple locations, so officials should consider whether test results secured at one construction site would be deemed effective for others. 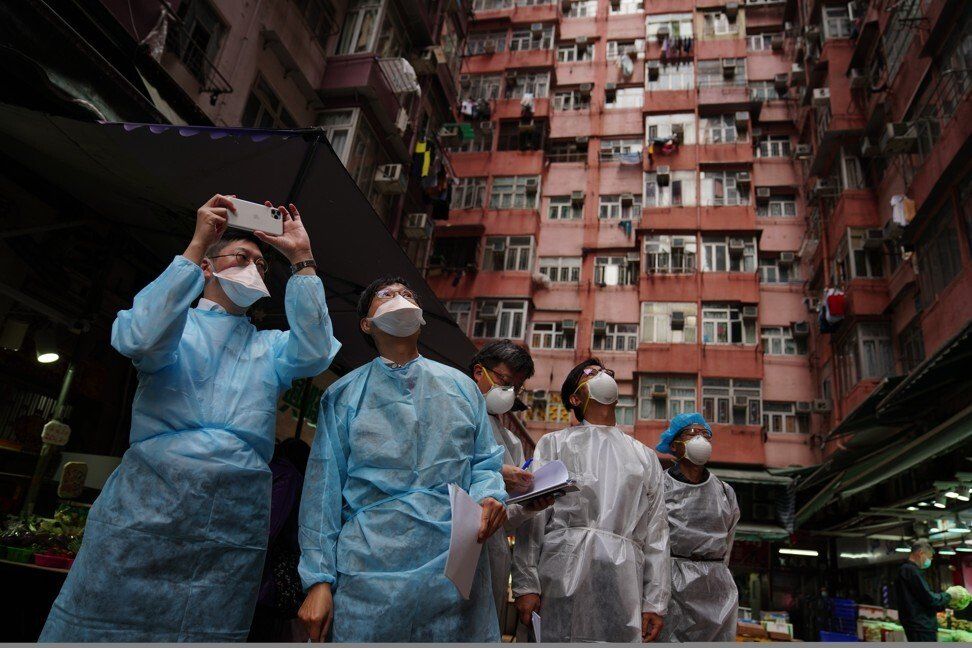 Meanwhile, in Macau, frontline health care officers, police, fire services, and those stationed at border control points will be among the first batch of people who can get free Covid-19 vaccines, with the casino hub’s programme to kick off from Tuesday.

The jabs will be administered on a voluntary basis.

Vaccination bookings for other Macau residents will also open at noon on Tuesday. They could receive the shots from February 22, the Macau government announced on Monday.

The vaccination scheme covers those aged between 18 and 60, but individuals aged 60 years or older in good health and facing high risk of exposure will also be included.

Insurance coverage will be provided for those in Macau suffering side effects of the vaccines within 90 days of the jabs. In the event of death or disability, a payout of 1 million patacas to each case will be available. Compensation for those aged 70 or above will be 500,000 patacas.

The first 100,000 doses of inactivated Covid-19 vaccines were delivered to Macau last Saturday. The Sinopharm vaccines were produced by the China National Pharmaceutical Group.

Each person is required to receive two shots of the vaccine to generate the necessary antibodies, meaning 50,000 residents will be among the first group in Macau to receive the jabs.

The Macau government has also purchased Covid-19 vaccines by Fosun Pharma-BioNTech and Oxford-AstraZeneca.