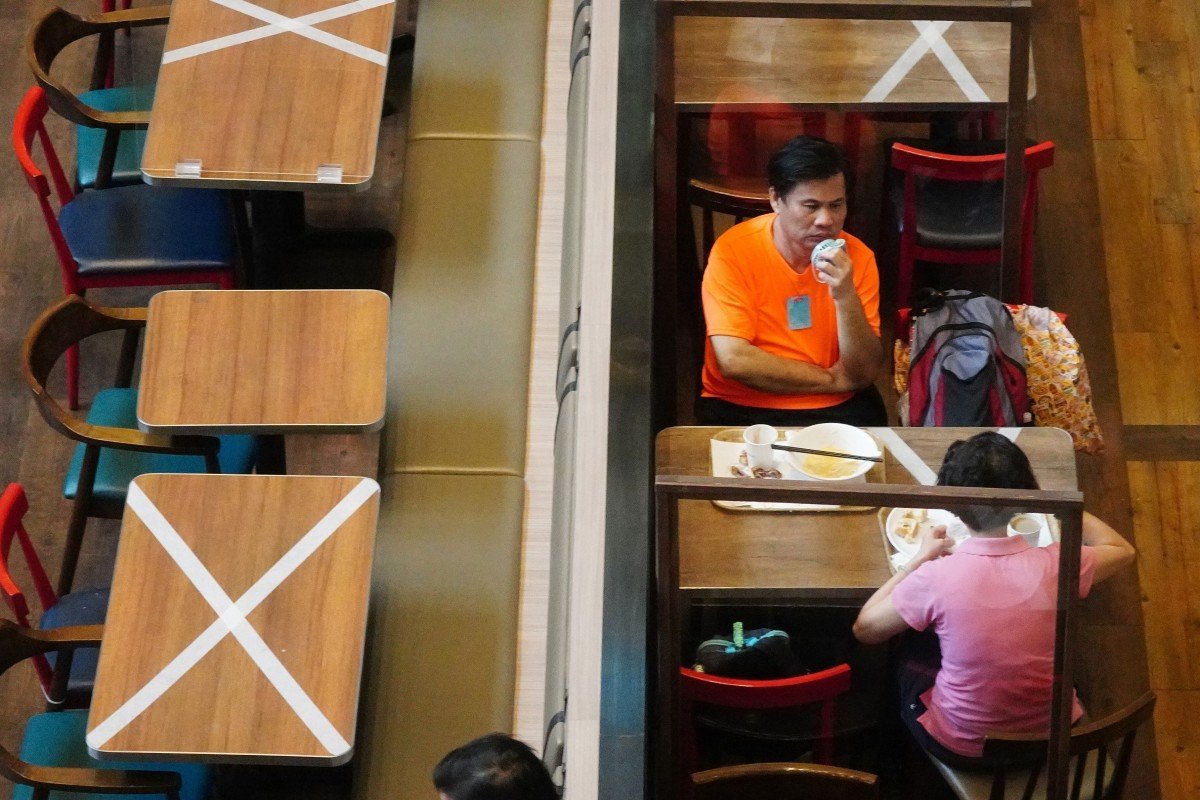 Online registration for the universal screening begins from 7am on Saturday, as ministers Patrick Nip and Sophia Chan urge all to take part in the scheme.

Dr Chuang Shuk-kwan, head of the Centre for Health Protection’s communicable disease branch, reported that all but three of the new cases were locally transmitted, while three infections were without a known source.

The news came as the government began to relax some social-distancing measures, including the reopening of cinemas and beauty parlours, and resuming evening dining at restaurants until 9pm.

Among the newly infected was another resident of Hong Chi Lei Muk Shue Hostel, a home for the mentally disabled, taking the number of confirmed infections there to 14. Another resident also tested preliminary positive, as did a nurse at the private clinic of Dr Tse Kin-wah.

A family cluster of three infections involving a Food Panda delivery worker, her 30-year-old son and 59-year-old husband was also found. Chuang said the delivery worker had worn masks on the job, so her customers were not considered close contacts. Her husband died two days earlier at Tseung Kwan O hospital with his infection only confirmed on Friday.

At a press conference earlier in the day, government officials unveiled details of the mass testing scheme set to begin on September 1, and urged residents to sign up for it from 7am on Saturday.

The scheme is initially expected to last for seven days, but authorities said they might extend it if demand was high.

A total of 141 sites across 18 districts, comprising mostly government schools under the Education Bureau, Home Affairs Department’s community halls, and sports centres administered by the Leisure and Cultural Services Department, have been chosen as makeshift testing facilities.

Yuen Long has the most sites, with 14, while Islands district has the least, with just one at Tung Chung Man Tung Road Sports Centre. 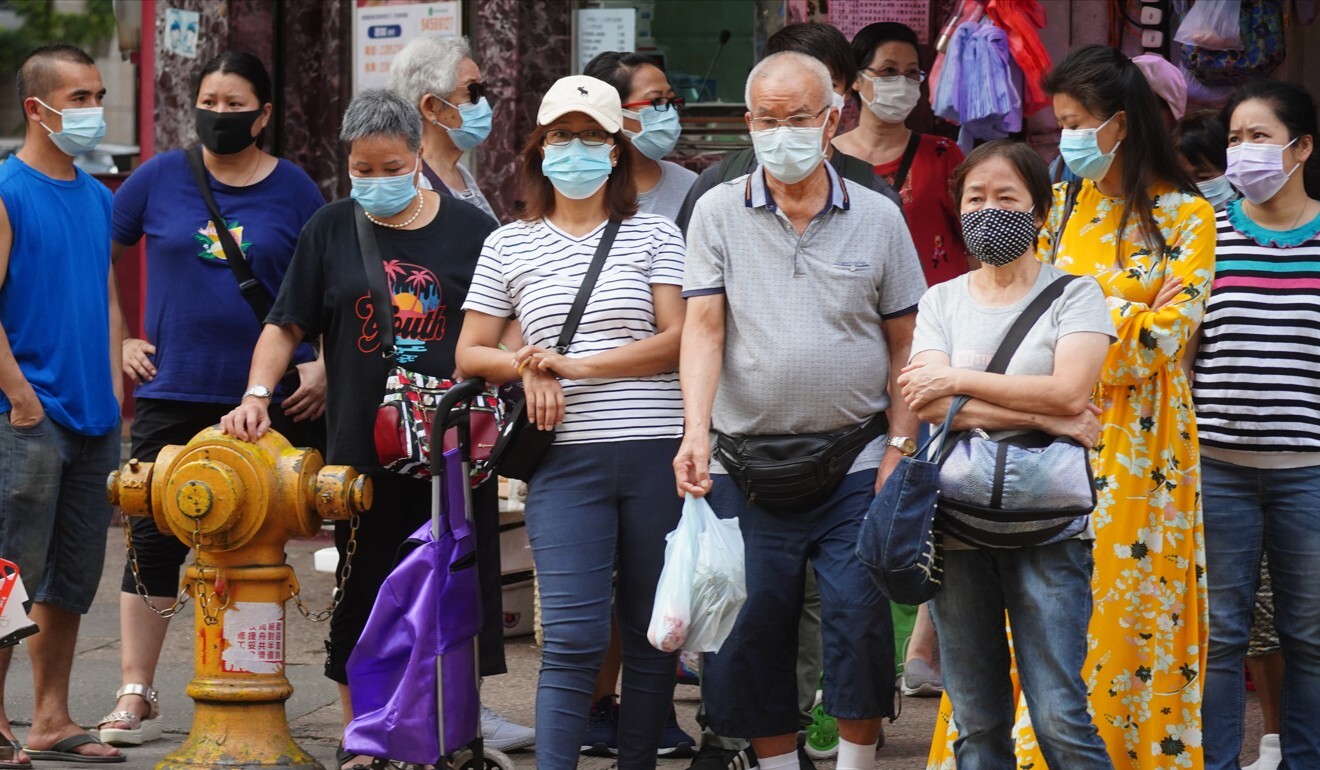 A total of 141 makeshift coronavirus testing facilities have been set up for Hongkongers across the city’s 18 districts.

“For yourself, your loved ones, our hardworking medical staff and the wider community, you should join the testing,” Secretary for the Civil Service Patrick Nip Tak-kuen said.

Those who test negative for Covid-19 would receive their results via text message within three days of screening, while those testing positive would get a call from the Department of Health, he added.

Secretary for Food and Health Sophia Chan Siu-chee also made the same appeal to the public. She said the government had conducted 950,000 tests since January, and had recently performed 420,000 tests on high-risk groups – such as taxi drivers and care home staff. But Chan said a mass testing scheme could detect the remaining silent carriers of the virus.

Nip said 6,000 medical staff – including doctors, nurses and other health care professionals such as paramedical personnel, first responders, and teachers and students at medical schools – had expressed their willingness to join the drive. They will be trained properly before taking part in the work and will wear protective gear when collecting samples.

He added that the government had put in place infection-control measures, such as temperature screening at entrances, and designated exits to avoid cross infections.

Daily collection of samples will run from 8am to 8pm, with disinfection carried out twice a day, while advance online appointment would ensure crowd control and help reduce infection risks, he added.

Some 164 technicians from mainland China arrived in Hong Kong on Friday, adding to the 60 who arrived earlier this month. Thomas Chan Chung-ching, permanent secretary for food and health, said up to 600 mainlanders would be involved in lab testing, while sample collection would be done by Hongkongers.

Dr Constance Chan Hon-yee, director of health, said the community testing scheme was designed for asymptomatic carriers of the virus. She said those who had already developed symptoms should not take the test, and should see a doctor instead.

Citing Swedish reports of about 3,700 false-positive results returned by faulty test kits supplied by BGI Genomics, one of the firms involved in Hong Kong’s mass-testing scheme, Permanent Secretary for Food and Health Thomas Chan Chung-ching said the Department of Health would run another round of screening for those testing positive, to ensure accuracy.

Nip also brushed aside privacy fears, saying personal data collected for testing would be encrypted and stored in government servers, and information related to people who tested negative would be destroyed after one month. He said the data would remain in Hong Kong, and testing agencies would only be able to see codes on the sample bottles.

The civil service minister said the government had made flexible arrangements to enable civil servants to go and take the test during office hours, adding he had spoken to business leaders to urge them to allow their workers to do the same.

“If you have domestic workers in your home, you can bring them along for testing, too,” he said.

Secretary for Education Kevin Yeung Yun-hung also drummed up support for the scheme, using his Facebook page to appeal to teachers, students and parents to join the testing drive.

Cheung said the government was ready to launch the health code system that would enable cross-border travel, as soon as the city’s situation stabilised. But he did not give an exact date. Under the system, travellers would be certified free of Covid-19 and therefore exempted from quarantine.

Pro-establishment lawmakers gave their full support to the universal testing scheme, and most said they would register for tests to be held in Legco on Tuesday.

But most opposition lawmakers said they would not take the tests, questioning security issues of the scheme over how their private data would be handled.